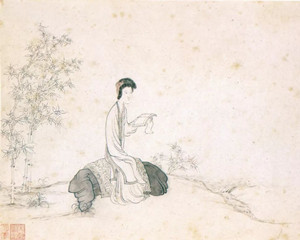 Fresh peaches I have seen

remind me of her delicate form;

in windswept willows I recognize

The pearl has returned

to the dragon cave;

who will see her now?

but the phoenix is gone;

how can they converse?

On misty rainy nights from now,

dreams will be of sorrow;

nonce can bear the silent pain

The sun has set and disappeared

beyond the western slopes;

and now the moon has risen

over the eastern hills:

how bitter it is to think of how

the end can come without cause.

The young peach I glimpsed calls to mind her jade beauty,

Willows trailing in the wind I recognize her moth eyebrows.

The pearl has returned to the dragon’s cave, who shall see it again? 1

The mirror remains on the phoenix stand, but to whom shall I speak? 2

From now on, in dreams I will grieve through nights of mist and rain,

Unable to bear bitter chanting when I am lonely.

As the sun sets on the western mountains, the moon rises in the east,

But there is no way to end my regretful thoughts.

1. Cf. Zhuangzi, chap. 32: “A pearl worth a thousand gold pieces certainly belongs in the nine-layered abyss, beneath the chin of a black dragon.”

2. According to legend, the king of Jibin (Kashmir) once bought a female phoenix. Despite being fed the most expensive delicacies, she refused to sing. After three years the king’s wife said to him, “I’ve heard that if a phoenix sees its like, it will sing. Why not hang a mirror in front of her?” The king followed her advice. The phoenix saw her reflection and cried out broken-heartedly. Spreading her wings, she rose into the air once and died.